The Lake District doesn't boast any official cathedrals but it does lay claim to several natural cathedrals that inspire awe and crown the fells.  The Pilgrimage visits seven of these 'cathedrals':

Dove Crag towers over the picturesque Dovedale, a bulbous head with a cave set under an overhang.  This is Priests Hole which can be reached by a small path and provides shelter for an overnight stay under the great overhang.

As its name suggests, Great Gable resembles the gable of a roof.  The mountain has an extensive broken cliff on its South West flank which is home to the Napes and its famous Needle, the base of which can be reached by a scrambling route.  This is the home of rock climbing in the Lake District.  The buttresses of the Napes rival those of any man-made cathedral.

Pillar Rock is very possibly, the most impressive rock pinnacle of them all.  It is almost a mountain in itself, with multiple faces riven by deep gullies.  It is best seen from below, preferably first thing in the morning when it is lit up pink by the dawn sun.  The High Level traverse via Robinsons Cairn also provides a very scenic approach.  The easiest way of reaching the top is by the Slab & Notch scramble which must also be downclimbed unless a rope is taken and an abseil made from near the summit rocks.

This high level crag is best seen in early morning or evening light, when its magnificent slabs and buttresses are seen to best advantage.  It is one of the most impressive cliffs in England and can be viewed at close quarters by following the scree shoot of Lords rake and the ravine of Deep Ghyll. 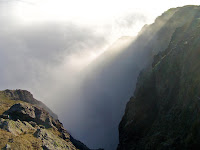 Dow Crag comprises proud buttresses split by deep gullies that stand guardians over Goats Water below.  The summit is a minor scramble over boulders with great views over the chasm below.  The climbers descent route of Easy Terrace providers a scrambling way of getting up the cliff.

This cathedral is to be found below ground, being a 12 metre high cave, reached by a tunnel.  It is part of an old quarry now owned by the National Trust.

Pike O Stickle is one the most distinctive mountains in the Lake District, and boasts one of the most impressive expanses of rock in Gimmer Crag.  The summit is a volcanic cone thrusting into the sky and reached by a very easy scramble up the final rocks, or by exposed scrambles up its main West face.

Why be a Pilgrim?

Like all pilgrimages, the Lakeland Pilgrimage is a long journey to a special place, in this case to the mountain cathedrals. It presents a w... 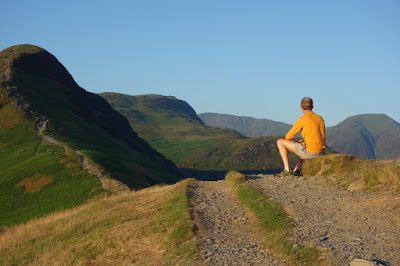